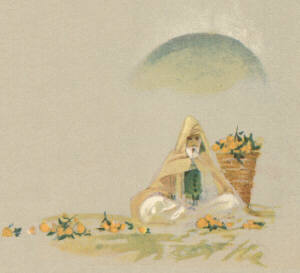 A glimmer of the coming dawn has been lighting up some passages with such an inspiring to my soul that I want to pass it on, though to many it may be a familiar thought. When it came to me I wondered why I had not seen it before.

In the parables of the talents and pounds we see a two-fold purpose – to give the servants something to do for their Lord, and to train them for their future work when the Kingdom should have come. The first aspect is familiar enough; the second has been to me in a very vivid sense a new revealing of that wonderful Day. The King knew when He went away that when the Kingdom was His He would need “rulers,” and all unknowing of what was coming of it, His servants got their training, and thus they were ready for rulership when He came back.

“They lived and reigned with Christ a thousand years.” This was to me vague and intangible, but it has become very real, for it will all be indeed real, that reign. Here, down on this very earth of ours, with its mountains and deserts and woods and clouds and flowers just as they are today, and the same races of men with all their nations and tongues to be won to one King. Think of it! The glory of seeing Him have His glory as last; the unspeakable joy of bringing sheaf after sheaf to lay at His feet where now the seed only yields a few straggling blades. “The joy of thy Lord” – ” Thou hast to Him increased the joy.” “They joy before Thee according to the joy of harvest, and as men rejoice when they divide the spoil.” Think of seeing His joy in the travail of His soul – the gladness of making God glad. Think of it till the wonderful joy of it dawns.

Think of the lands, where we have toiled on – some of us – with so little fruit to be seen, springing up with the sudden golden glory of harvest. The seed cast on the waters in journeyings oft, found after many days; desert lands, that we had left with a heart-break for the dear souls who might only have that one hearing, blossoming as the rose. Think of places beyond that our hearts have yearned over, but where the door has never opened. Would it not be like the Lord Whom we are learning to know, to let us go just there when His Kingdom comes, with resurrection bodies that will not flag or fail in any climate, with the Lord’s power triumphing gloriously instead of the weary fight, with a thousand years in which to do the work instead of these poor ten or twenty or thirty that we feel so sadly short, when we look around and see that all we can do barely touches the fringe of what is left undone.

Think of the fellowship of the work – the lonely scattered workers now with little of the communion of saints here below. Think of working alongside Rutherford and Terstegen and Fletcher and all the lovely saints of all ages and nations, to say nothing of the goodly fellowship of the apostles and the noble army of martyrs. And think of all authority being on the side of Jesus. Some of us are working here against the tide – then He will be recognised over all the earth, King of kings and Lord of lords.

Now take your eyes off this wonderful vista, down again to the browns and greys of “this present world.” Has not a light come on some of its mysteries? What if He sends out some of His servants to heathen lands just to die in a year or two? Do we not judge the matter as if it were really bounded by the low narrow horizon of this life? They have had their bit of training and are ready for their work, that is all. And those whose whole heart is in the foreign field, but who through health or circumstances cannot go – never mind, you will be there some day, and the training is going on now. The answer will be exceeding abundantly above all you asked or thought, just as wonderful as when in answer to Moses’ longing prayer, his feet stood with Jesus on the Mount of Transfiguration. He went over indeed to the goodly mountain whose top he saw from Pisgah. God’s answers lose nothing by being kept into eternity, and you who feel powers beginning to fail and sadness creeping over you at seeing the end of the blessedness of a life spent for Jesus, oh! let us lift up our eyes, we are coming to the end of our training, and we are going to see that they who sow in tears shall reap in joy. It may be that in the fellowship of tears with Him you are having a training to make you able to bear the joy of that day. But oh! to be faithful in the time that is! Infinite is gain carried over into eternity and infinite is eternal loss. “Thy pound hath gained ten pounds.” What is the multiple of fructifying power for the gifts and probations that God has given us? Not human toil and effort, not even the spirit of faithfulness, but the Holy Ghost, the Lord and Giver of Life.

Oh to enter on the life eternal, with every fibre in character and brain and capacity “alive unto God” through Him. Only so can His pound gain ten pounds. But many of us are having a mixed life of the flesh and the Spirit – much that is gold, silver, and precious stones, and much that is wood, hay, stubble; and before His Kingdom is set up on earth the fire must try every man’s work of what sort it is. God grant us to judge ourselves now that we be not judged of the Lord hereafter.

“Earth is the rehearsal for heaven. The eternal beyond is the eternal here. The street life, the home life, the business life, the city life in all the various ranges of its activity, are an apprenticeship for the City of God.” – Drummond