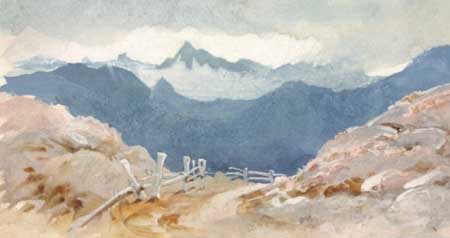 A thin cloud of smoke was hovering over a certain spot on the opposite side of the little Swiss valley. Day after day it had been hanging there, without increasing or diminishing. At last I asked what it was. “Oh, it is a tree,” they answered. “A wood-cutter lit his fire under it a week ago to cook his dinner, and it has been smoldering ever since.” “But it will spread, will it not?” “No, there is no flame, so it cannot spread,” was the answer.

It was damp with mists around it and with the sap within it, so it smouldered on and nothing happened. When we left a few days later, it was still smouldering. “There is no flame, so it cannot spread.” The words have often rung in my ears ever since.

May God send them on to ring in other ears too! For if the hearts in England, where God’s Fire smoulders now were lit up into a flame, the glow would be felt around this poor, dark, cold world before long. It is such a cold, dark world to the God who “so loved” it, that nothing but love will meet His longing! The false religious systems at their best are frozen still with formalism and slavish fears. They are chilled through and through with meaningless ceremonies and silly superstitions, and a dull morality with no power to make it workable…

Oh, the hugeness of the need – what can touch it? These days of ours are slipping between our fingers as it were, and their chances will soon be over forever. The months that we still have to live, even the youngest of us – how fast they go by! What does Christ feel about the priceless months that pass, like with our Swiss tree, where nothing happens around the spot where we stand? Nothing happens – is it so? There is no flame so it cannot spread. Oh, the smouldering lives and their possibilities! More sorrowful in one way than the unlit souls around; for of all the sad words of the tongue or pen, the saddest are these – “it might have been.”

First – It is not a question of doing more, but of being more. If that Swiss tree had given itself for just a few more moments to the fire that was kindled in it, the outward results would have been very different. A flame must spread, but the tree would not let itself go. The strong sap within it fought out the battle; the tree held itself carefully back, and it saved its life. The autumn storms were coming on, and I daresay that the tree is safe and stands to this day.

The autumn storms are coming on the world too, and the chances of spreading a fire round us are dwindling day by day. If we will save our lives for ourselves, save our money to spend on our own pleasures, save our time for our own interests and pursuits, save our homes from the sorrow of a parting – well, if we will, we must. But remember, “He that saves his life shall lose it” and all that saving will be proven to be as a deadly loss when Christ comes.

Let us give ourselves away to Him for His world – away, away down to the deepest depths of our being, money, time, influence – and home if He call us to it – all as fuel to His fire. But let us give Him our heart of hearts first. “They… first gave their own selves to the Lord and unto us by the will of God”: that was God’s order in the beginning, and it still is. Where will the influence of those who give themselves away finally end? Who can say – like a flame once aroused it may sweep on and on.

May I tell you a bit of personal history? It is just the case in point. Years ago I was busy in London work. All were prospering with God’s blessing, and I had no thought but to spend my life there. The whole missionary subject seemed to me rather dull and was altogether beyond the horizon.

But I had two friends with whom I was often thrown together with at work, and they both had taken to heart the needs of a dark world. I do not remember that they ever said anything personally to me about it, but one could sense it right through them. They were all aglow and after a bit, though I took no more personal interest in the matter, I began to feel that they had a fellowship with Jesus that I knew nothing about. I did love Him, and I did not like to be out in the cold over it, so I began to pray – “Lord give me the fellowship with Thee about the nations that Thou hast given to those two.”

It was not many weeks before it began to come – a strange, yearning love over those who were “in the land of the shadow of death” – a feeling that Jesus could speak to me about them, and that I could speak to Him – that a great barrier between Him and me had been broken right down and swept away. I had no thought of leaving England then or even at first of trying to stir others at home, but soon God made my way out into the darkness before eighteen months were over, and through eternity I shall thank Him for the silent flame in the hearts of those two friends, and what it did for me. Neither of them has ever had her path opened into foreign work, but the light of day is coming when He will show what they have done in kindling other souls.